Islands of the Wild Northwest

Haida Gwaii is a place like no other. This wild collection of islands — part of Canada’s British Colombia — rises from the depths of the Pacific Ocean over 700 kilometres northwest of Vancouver. Formerly known as the Queen Charlotte Islands, its modern name translates to “Islands of the People”, for the tribes that have lived there for 12,800 years and counting. Having always been the domain of nature and native peoples, Haida Gwaii hosts an intriguing combination of geological, indigenous and colonial histories that continue to collide today. This is a rugged archipelago with an equally rugged story. 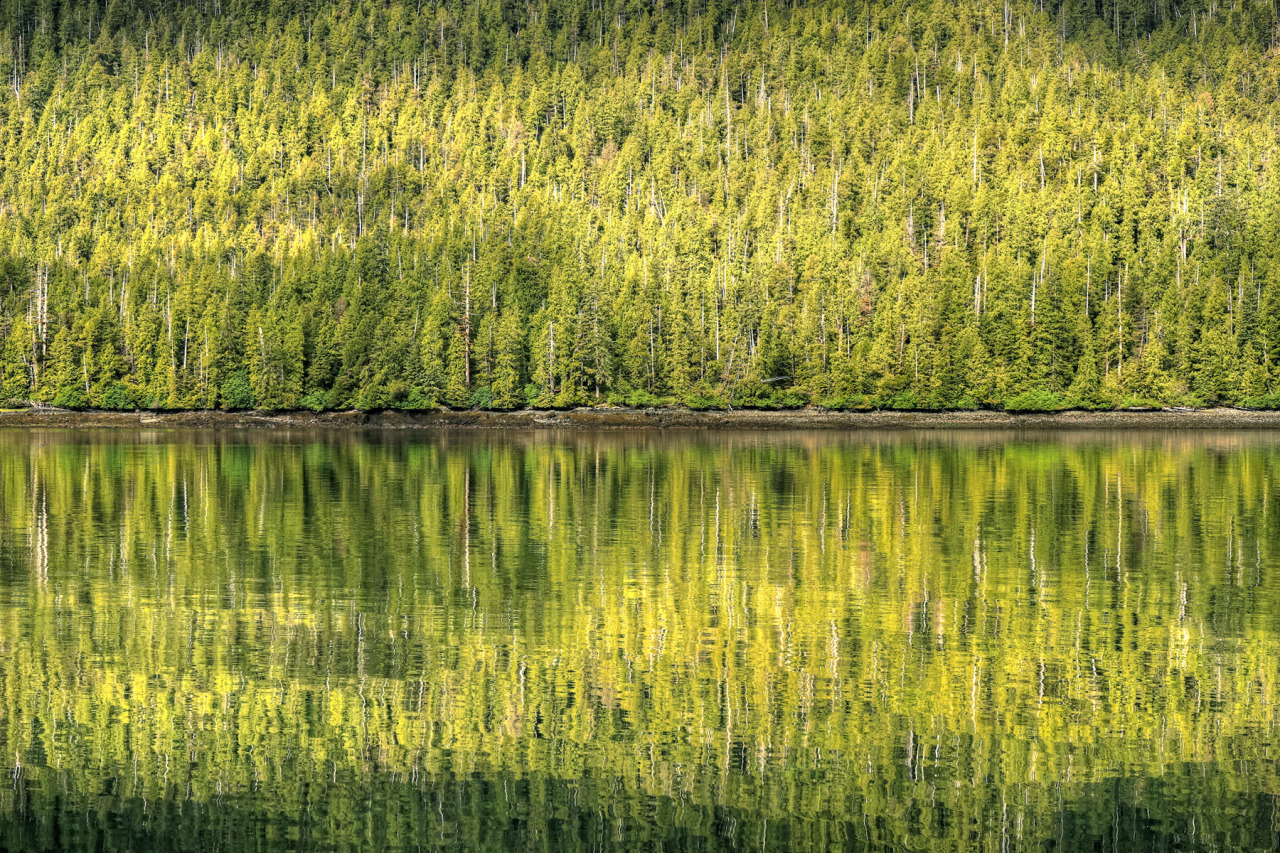 “On the Northwest Coast, there is no graceful interval between the ocean and the trees; the forest simply takes over where the tide wrack ends, erupting full-blown from the shallow, bouldered earth. The boundary between the two is unstable, and the sea will heave stones, logs, and even itself into the woods at every opportunity.” — The Golden Spruce, John Vaillant. 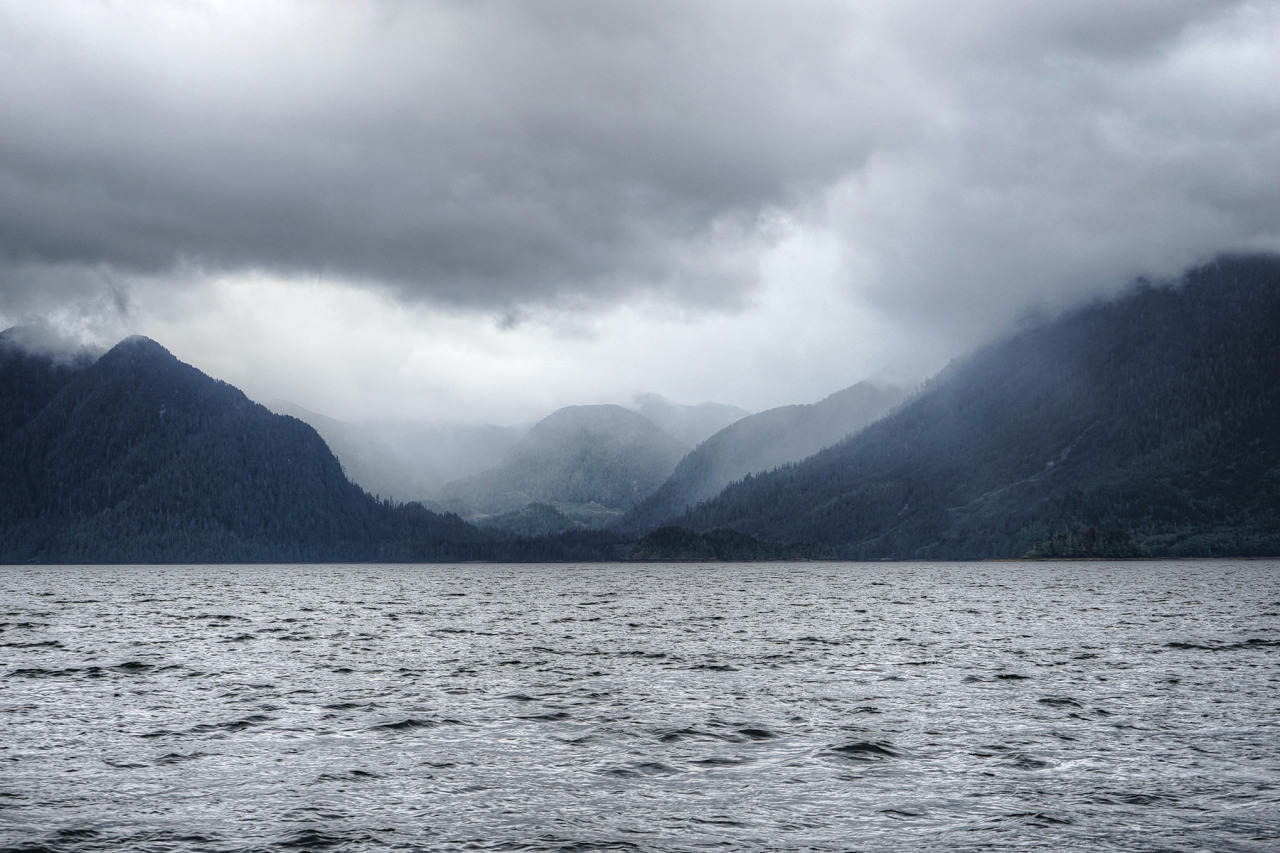 Rain is never far away on Haida Gwaii. With a mild climate for its latitude, snow shovels are rare here and precipitation prevails. Spared from the ice sheet that covered the majority of North America during the last mini ice age 10,000 years ago, parts of the island group and nearby Hecate Straight were an ancient Arc, providing refuge for flora, fauna and Haida villagers. This historic habitat and its high rainfall joined forces on Haida Gwaii to produce more biomass per square metre than any other place on Earth, and some of the world’s largest trees. 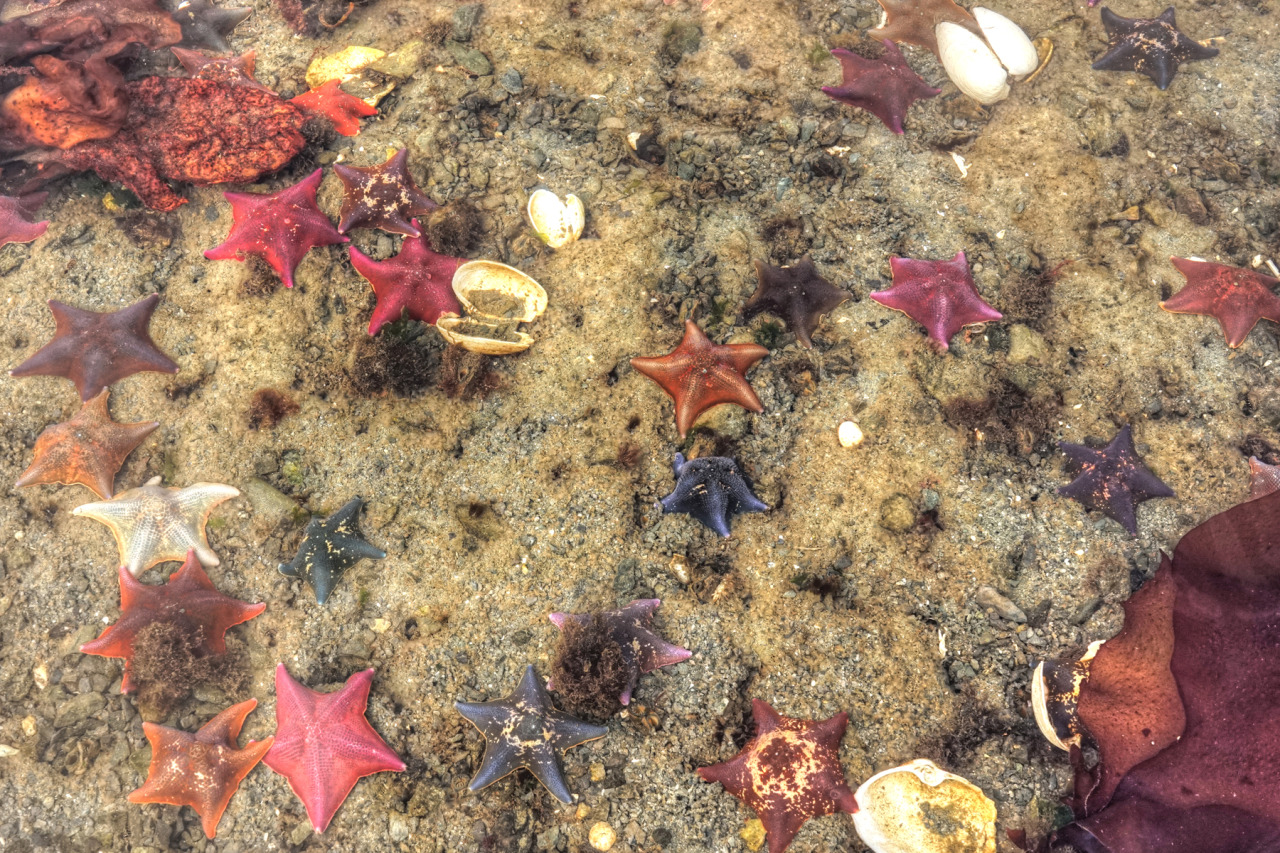 Colourful bat stars smother the seafloor in Crescent Inlet, Moresby Island. Astonishing concentrations of species populate the intertidal zones of Haida Gwaii, where titanic tides of up to eight metres transport life-supporting nutrients – and unsuspecting kayakers – rapidly through its narrow channels. The richness and fragility of these ecosystems spurred the 2010 creation of Canada’s newest marine protected area surrounding the southern islands, an area often referred to as Gwaii Haanas. The Gwaii Haanas National Park Reserve, National Marine Conservation Area Reserve and Haida Heritage Site – a long-winded title aimed at respecting bureaucratic and native demands – is the world’s first protected area to be managed from mountaintop to sea floor. 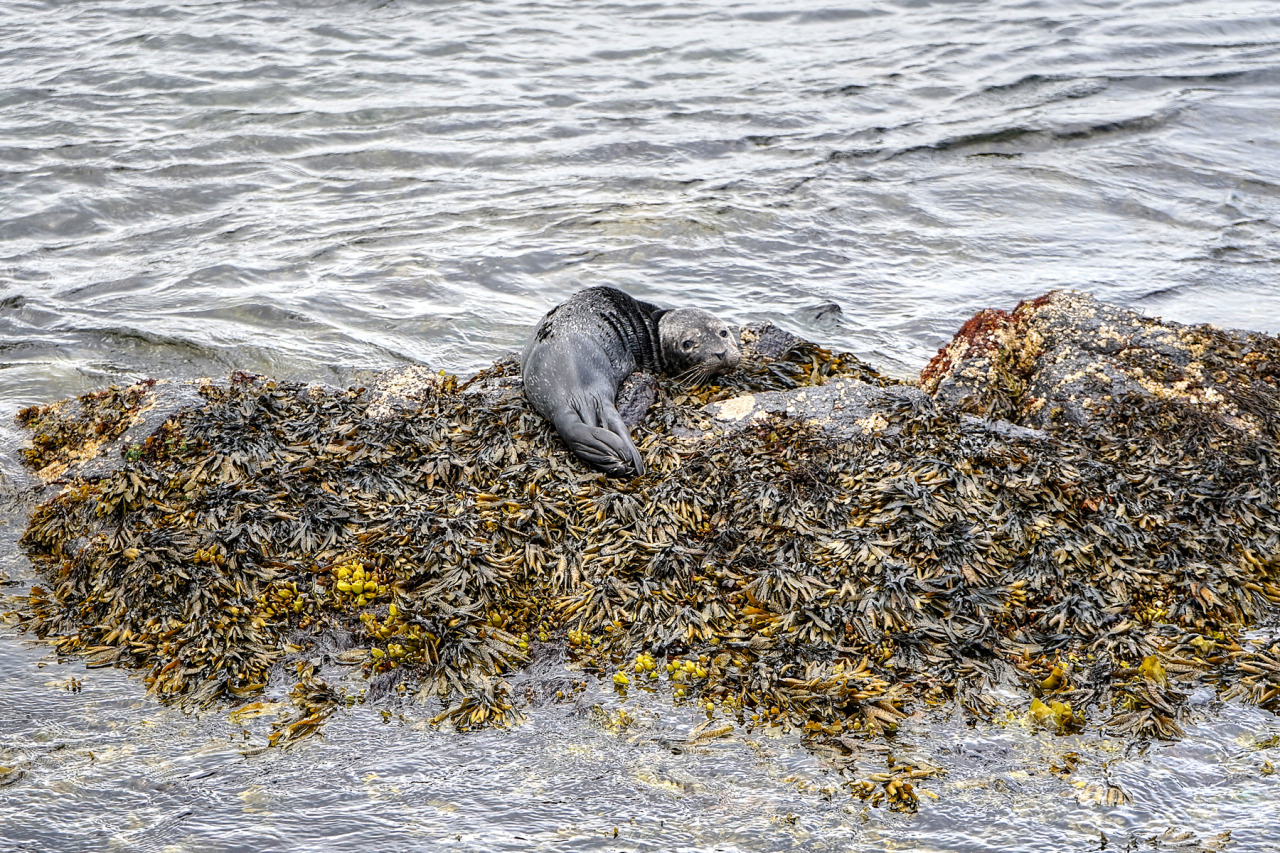 A harbour seal pup rests at a haulout site near Cumshewa Head. Marine mammals abound in this water world – often referred to as the ‘Canadian Galápagos’ – with over twenty species of whale, dolphin and porpoise frequenting Haida seas and large populations of seals and Stellar sea lions claiming the islands’ rocky real estate. Pods of orca, killer whales, are regularly seen in these waters, and humpback whales provide stunning acrobatic performances after arriving from Hawaii or Mexico in early April. 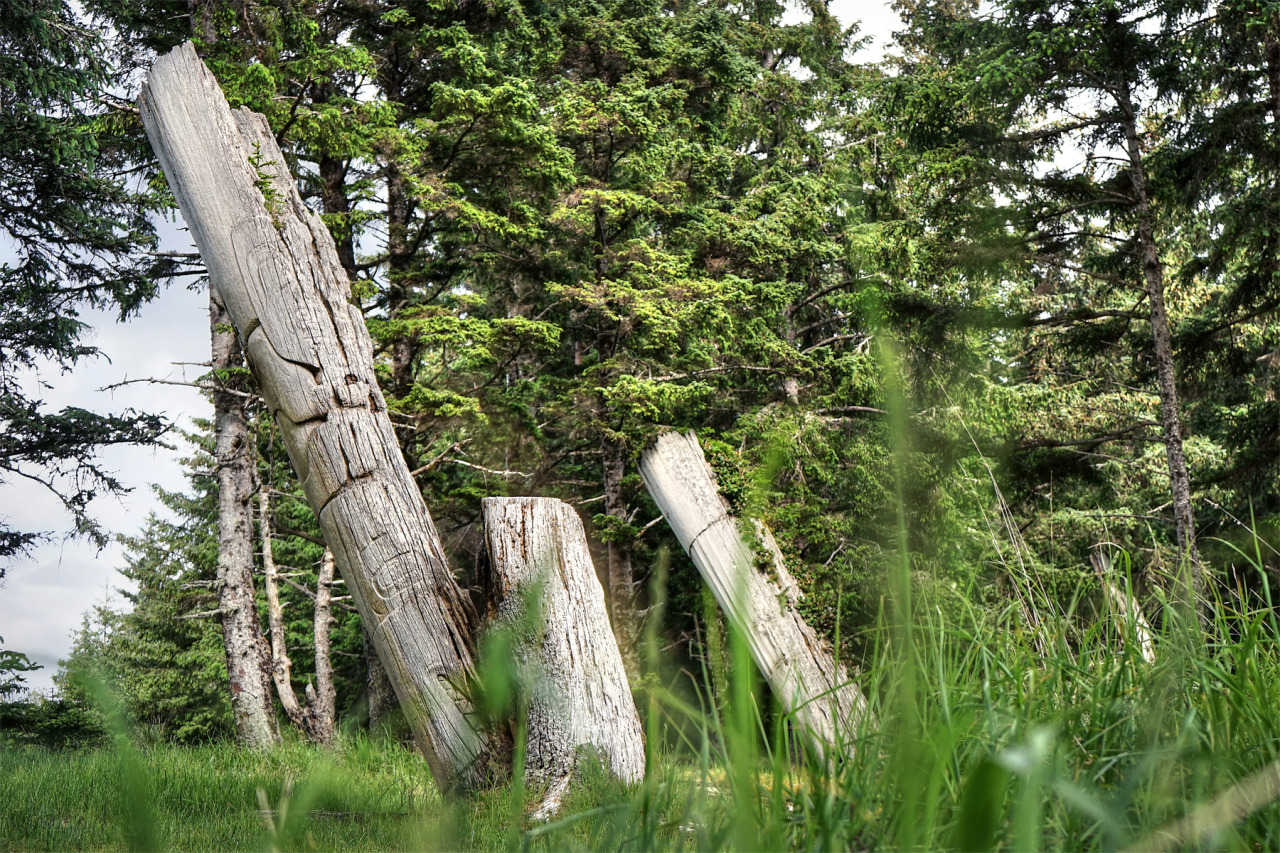 Ancient Haida poles stand guard in K’uuna Llnagaay (Skedans Village). Park guides estimate the carved giants will fall within twenty years, returning to feed the soil that sustained their growth centuries ago. The Haida are perhaps most widely known – if not by name then by symbol – for these impressively enormous poles which are now almost synonymous with North American indigenous art. These monuments have served as Haida memorials, mortuary shrines and house-front status symbols for thousands of years. Most likely the victim of smallpox, Kitty M. Clew rests in an eerie cemetery in New Clew, a long-abandoned Haida village. With the arrival of European sea otter fur traders in the late 1700’s came opportunity, danger and rapid change. Perhaps the most immediately destructive change came not through weapons nor warfare but disease; by the mid-nineteenth century – only two generations after ‘first contact’ – ninety percent of the Haida population had succumbed to smallpox brought by the early sailors. Most villages were left with such small populations that they were forced to combine with other tribes, moving to the missionary-established settlements of Skidegate and Old Massett that remain strongholds for Haida today. 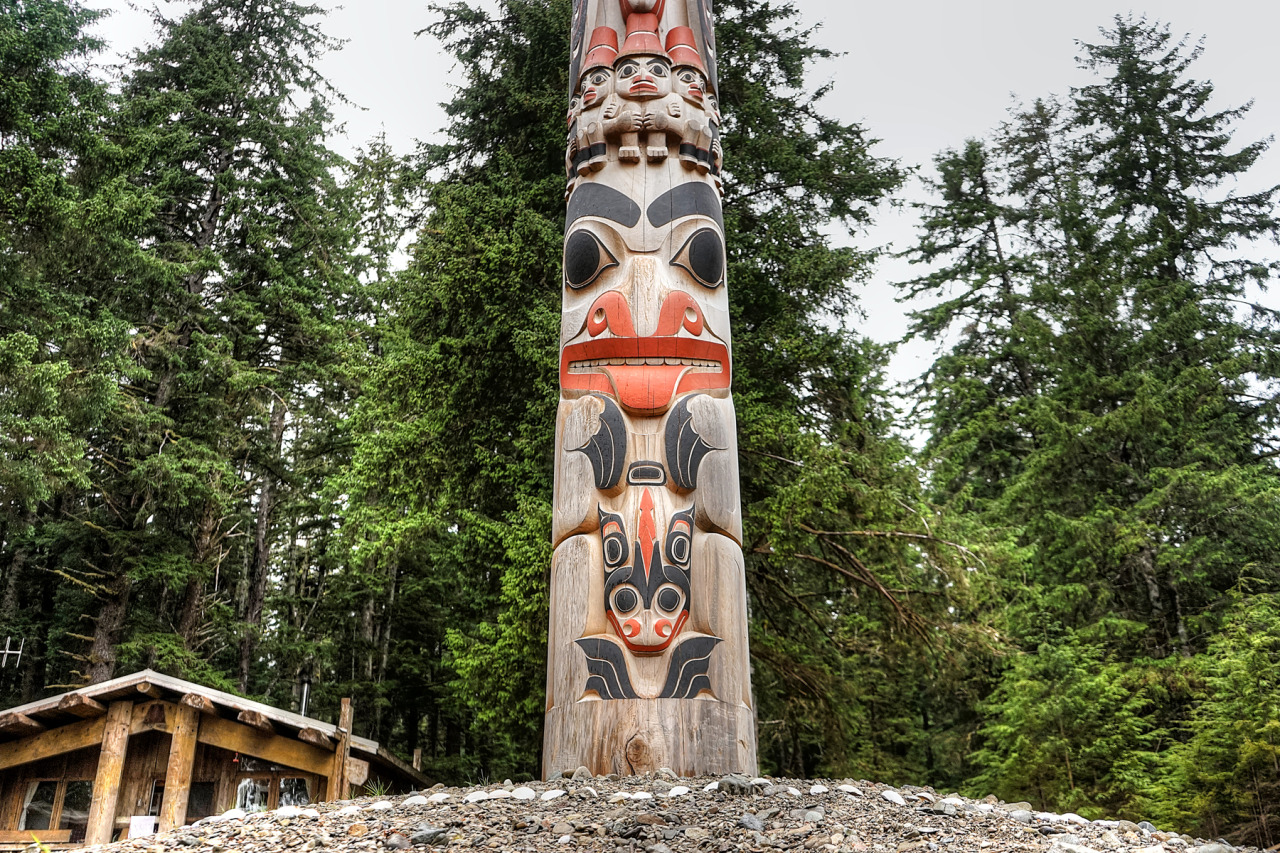 Raised in front of a crowd of hundreds on 15 August, 2013, the Legacy Pole at Hlk’yah GawGa (Windy Bay) was the first to be raised in Gwaii Haanas in over 130 years. As well as telling traditional tales, the pole’s carvings speak of modern issues. It features the gumboot-clad Haida who in 1985 famously blocked logging roads and whose protests ultimately led to the 1993 designation of the Gwaii Haanas National Park Reserve and Haida Heritage Site, protecting the southern group of islands. The pole also acts as a window into the future for local Haida; National Geographic Expedition boats have already started visiting the site. 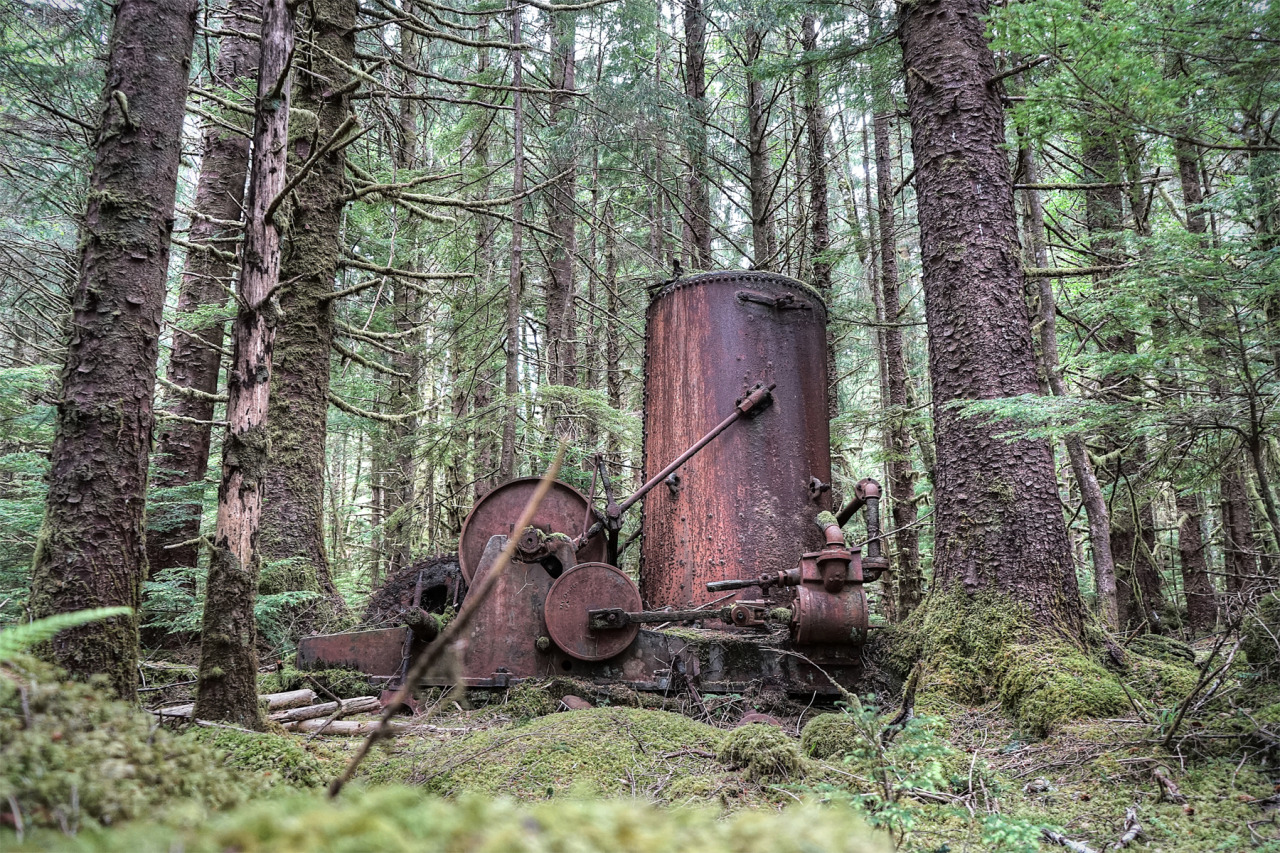 A ‘Steam Donkey’ sits abandoned in forest regrowth on Louise Island. Part of a logging camp that operated here during World War II, this steam-powered cable winch hauled hundreds of tonnes of felled old-growth trees out of the forest and towards their next stop; the timber mill. This industrial innovation replaced traditional wooden flumes and teams of oxen or horses, paving the way for gargantuan increases in logging efficiency, fuelling even faster forest destruction, and setting the scene for spectacularly horrific injuries. 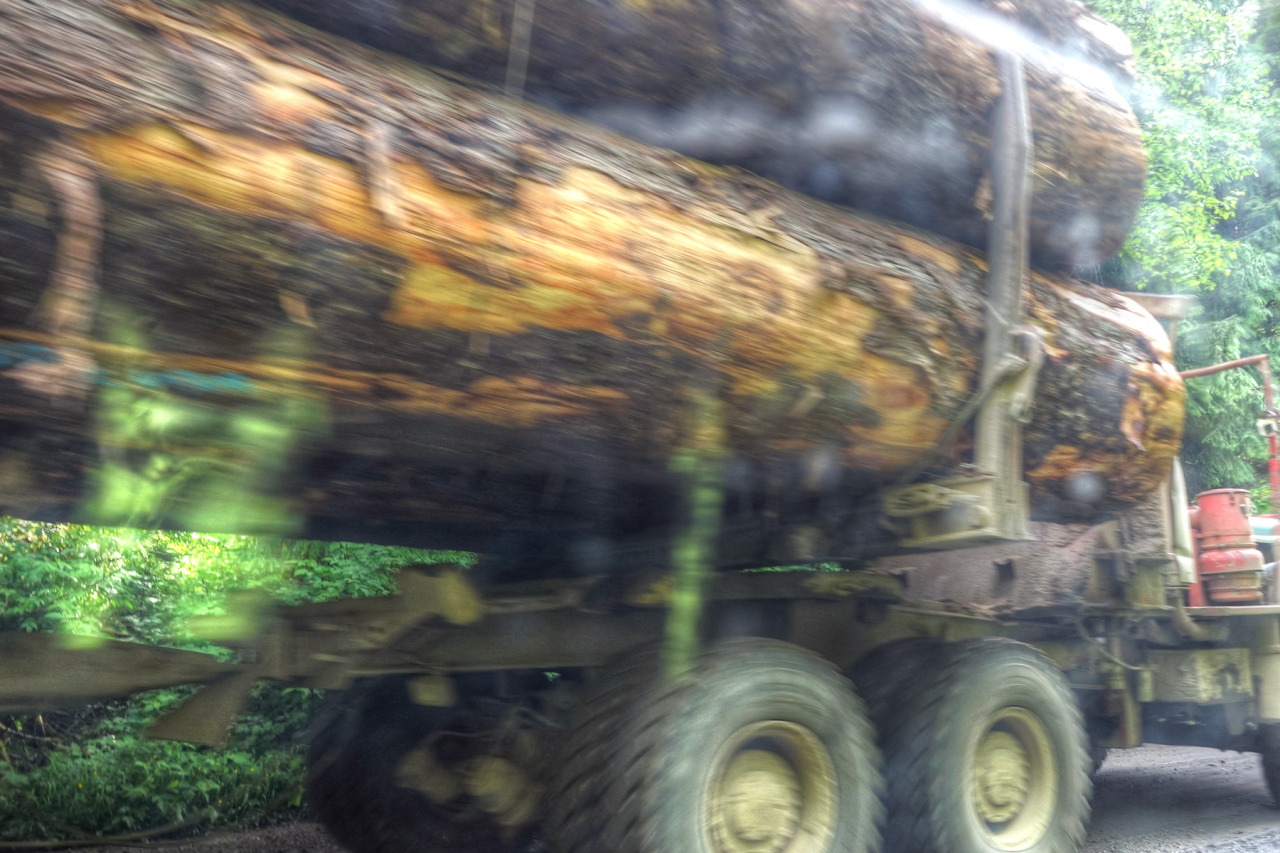 The clear-cutting continues. A logging truck carrying 50 tonnes of recently felled lumber thunders past on the winding road to Rennell Sound, the only road-accessible spot on the relentlessly rugged west coast. Alongside commercial fishing, logging remains one of Haida Gwaii’s primary industries despite ongoing conflict over ownership and rights to log. In a community experiencing unemployment rates of up to 70% in some villages, the jobs are needed. 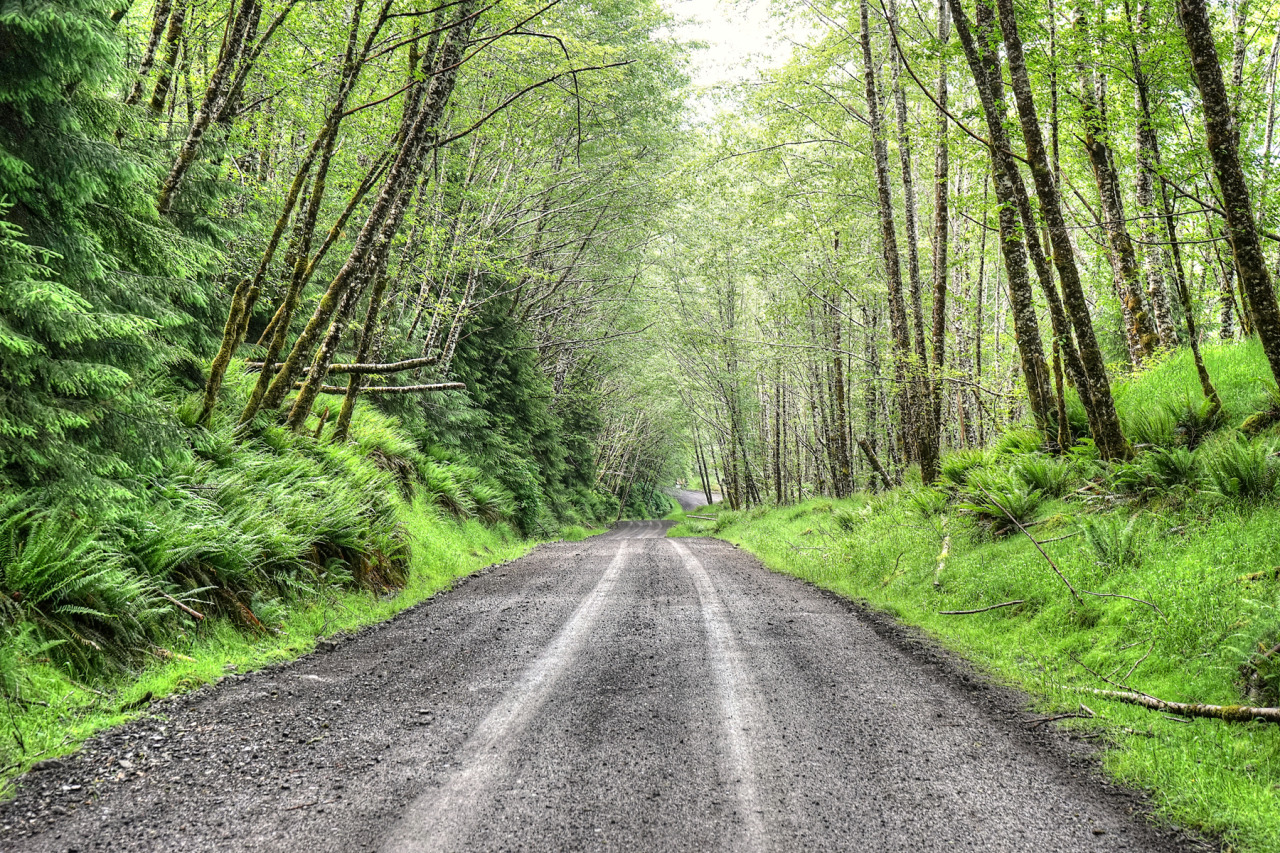 Red adlers line the logging road to Rennell Sound. These deciduous trees have grown in place of the milled old-growth goliaths that once stood here. This type of second growth forest now dominates huge swathes of land on Haida Gwaii, with two thirds of the best habitats for salmon, bears, birds, medicinal plants and people now gone or – in timber-trade-terminology – two thirds of the high and medium value resources extracted. 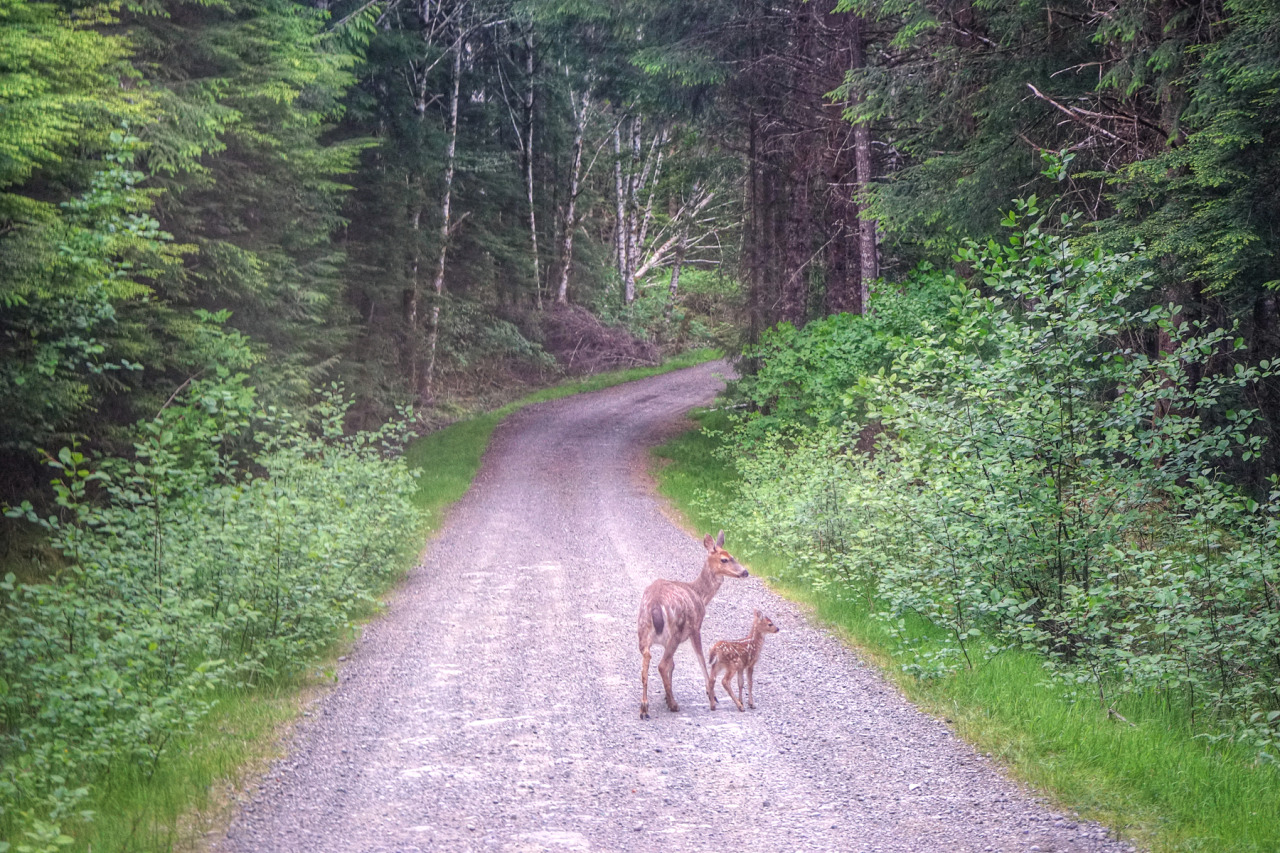 A doe and her fawn seem only mildly perturbed by oncoming traffic. Sitka black-tailed deer like these two have proliferated since their introduction to the islands in the 1880s as a hunting and dietary supplement. With few resident predators their population has exploded to an estimated quarter of a million deer, equivalent to 25 per square kilometre. They maintain a ubiquitous and dangerous presence on Haida Gwaii’s few roads, especially at night. Their intensive forest floor grazing has greatly thinned undergrowth and threatens the survival of a multitude of native species, such as the giant red cedar, whose seedlings don’t survive past deer-browsing height. 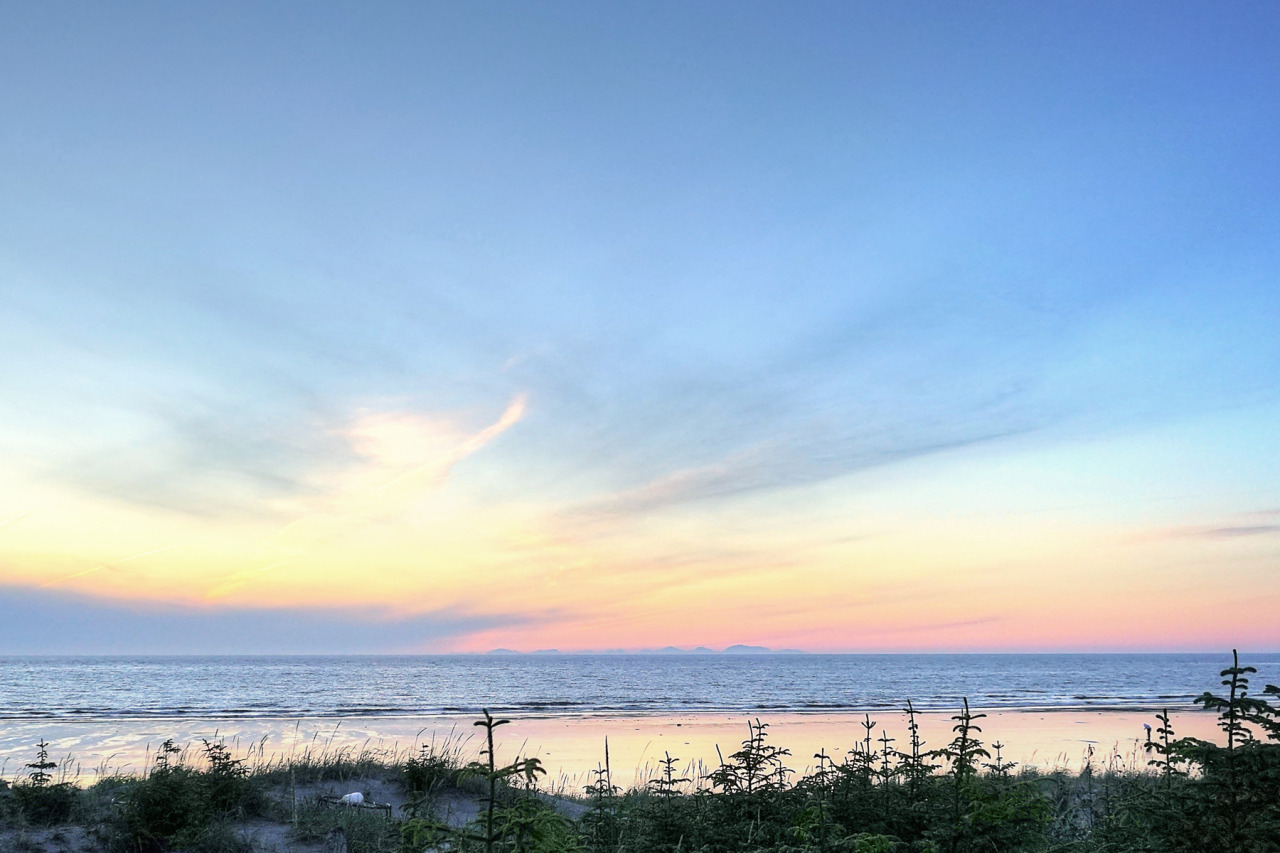 The coast near Tow Hill in Haida Gwaii’s far north on an uncharacteristically calm evening. Prince of Wales Island, Alaska lies 70km across the Dixon Entrance, a stretch of water infamous for its volatility that is now the centre of a heated debate. Just as the complex issues presented by the logging industry have drawn protest and controversy on the islands, so too has recent discussion around the construction of a major oil pipeline and tanker route through the Hecate Straight and Dixon Entrance. 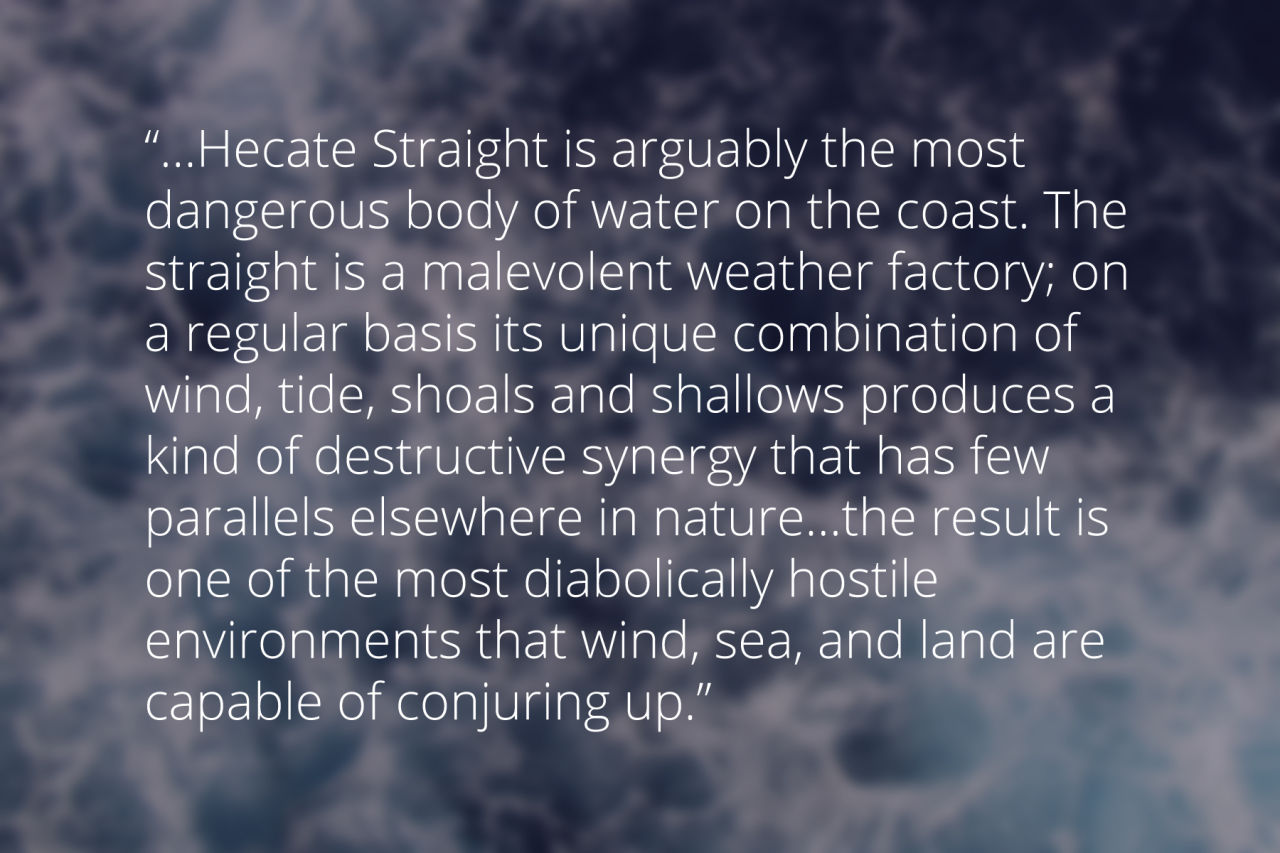 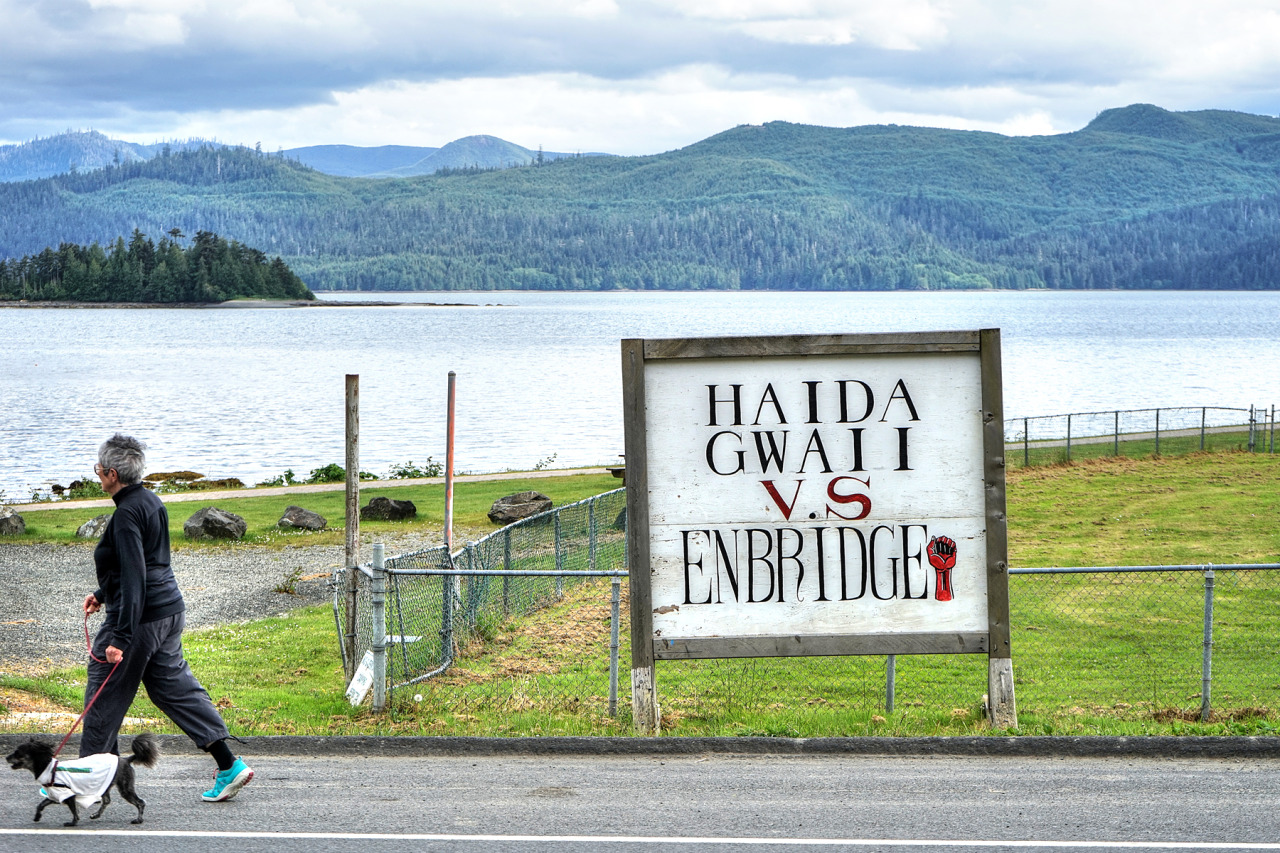 Locals have erected hundreds of signs around the archipelago intended as a show of unity against Canadian engineering giants Enbridge. On 17 June, 2014, the federal government approved Enbridge’s proposal to build the Northern Gateway project; an enormous oil pipeline destined to fill tankers that would pass through Haida Gwaii’s notoriously dangerous waters, en route to Chinese ports. Even though the government’s approval came subject to 209 recommended conditions, this decision marked a huge hit for the Haida, who have vehemently opposed the idea since its early days. 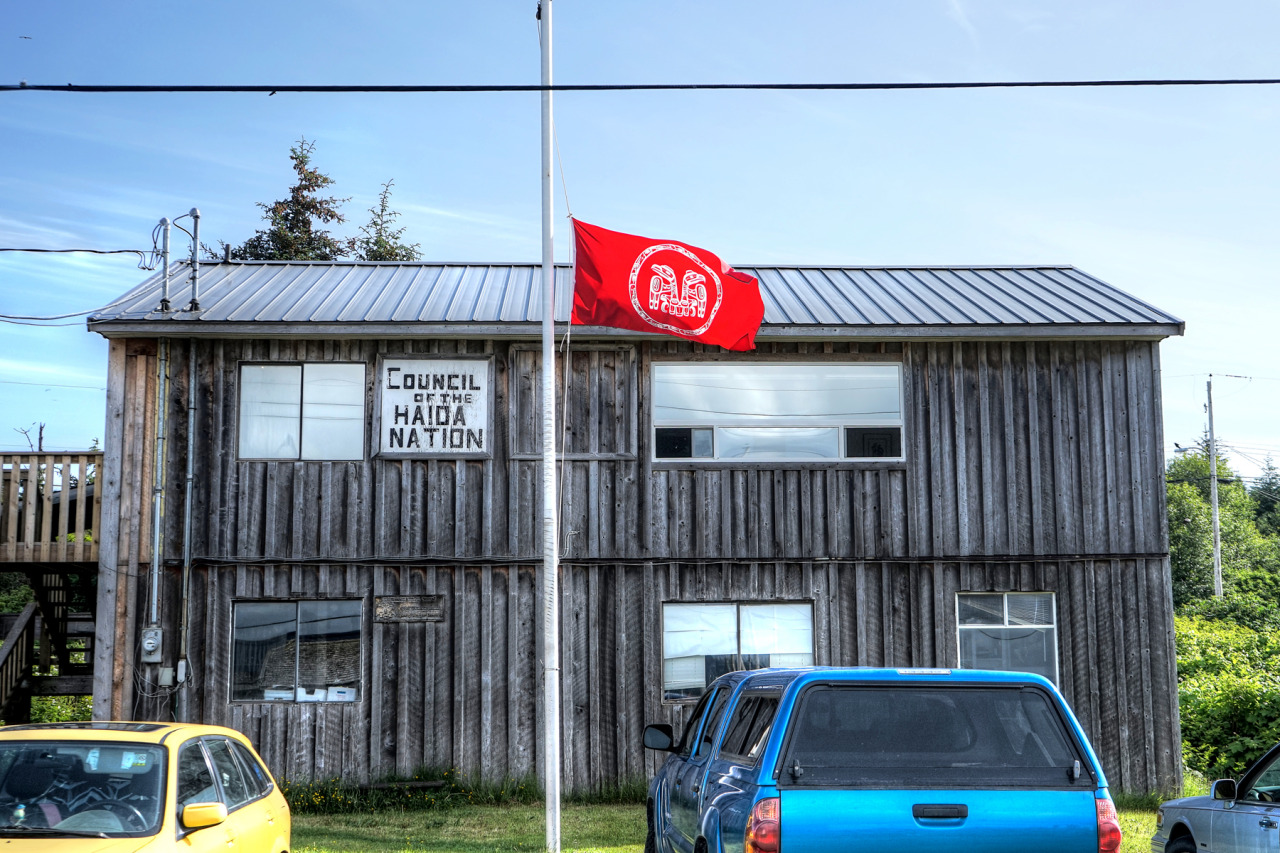 The Haida Nation flag flies outside the office of the Council of the Haida Nation in Old Massett, two days after the federal government’s controversial decision. The Council was formed in 1974 to represent and organise the Haida people, and has become a powerful political entity. The battle continues; on 14 July 2014 the Council of the Haida Nation filed a legal proceeding in the Federal Court of Appeal challenging the government’s decision to back the tanker and pipeline project. With more than 1,000 incidents resulting in injuries, deaths and spills since 2000 – from Canada’s larger provincial pipelines alone – the grounds for battle seem justified. 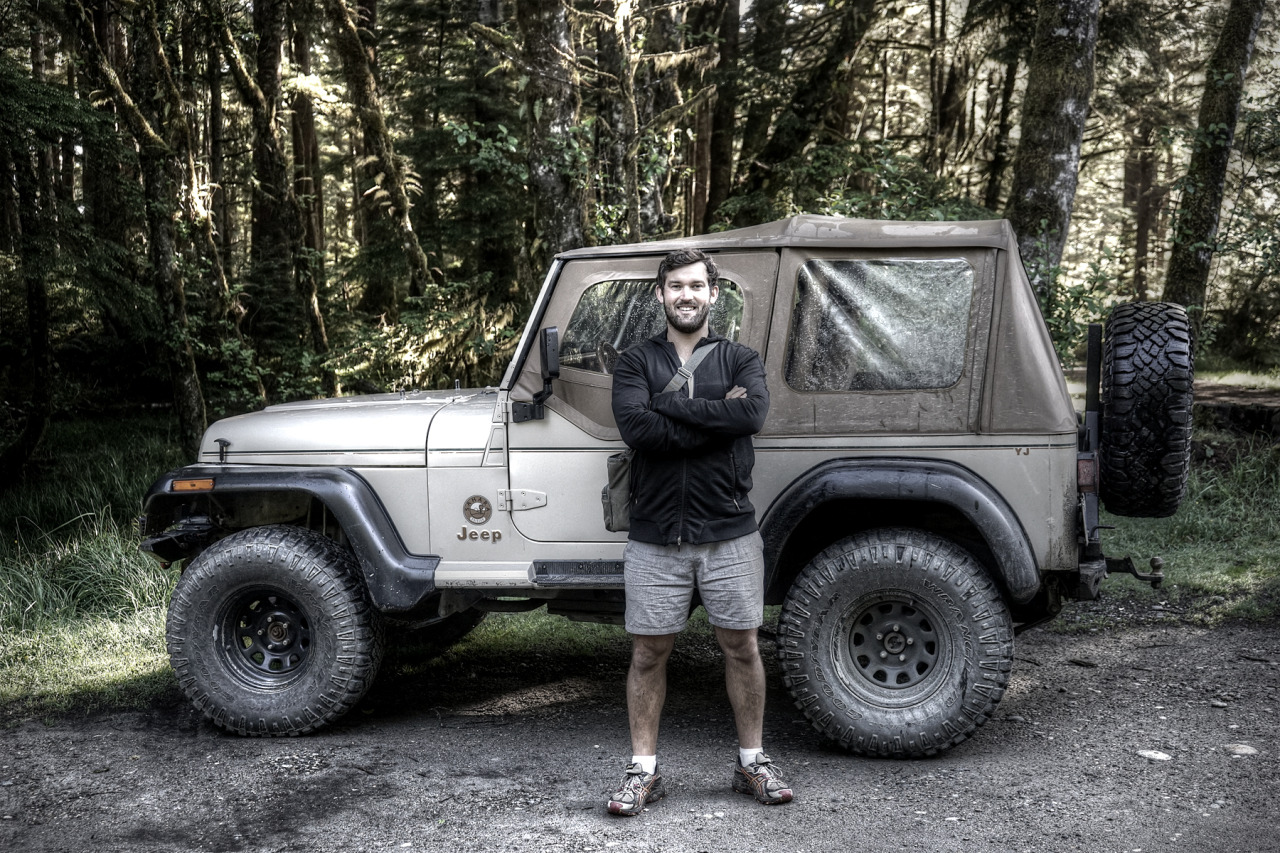 Camden Howitt is General Manager and Communications Director for multi-award winning New Zealand charity Sustainable Coastlines. He also shoots photos, writes, designs websites, crafts infographics and works on brand strategy for a range of for-profit and not-for-profit clients. For another view of Haida Gwaii check out The Fortune Wild, a Wes Anderson-inspired surf adventure film made by the fine folk from Sitka. Better still, go there. It is truly awesome.

We are a design agency based in Auckland, New Zealand, working on good-looking solutions for smart-thinking brands. Let's talk.